Dornbracht has unveiled a collection of spa-inspired bathroom fittings, including a massaging shower that targets three points of the spine and a tap designed for home facials.

Described by the brand as “health-orientated bathroom design”, the concept is intended to replicate spa facilities in a home environment – tapping into the growing popularity for wellness treatments.

“In the future, much preventive health care will take place in the home,” said managing director Andreas Dornbracht.

“Water applications can enhance a health-conscious lifestyle in a variety of ways – not just with regard to physical fitness, but also as far as mental performance and life energy are concerned.” 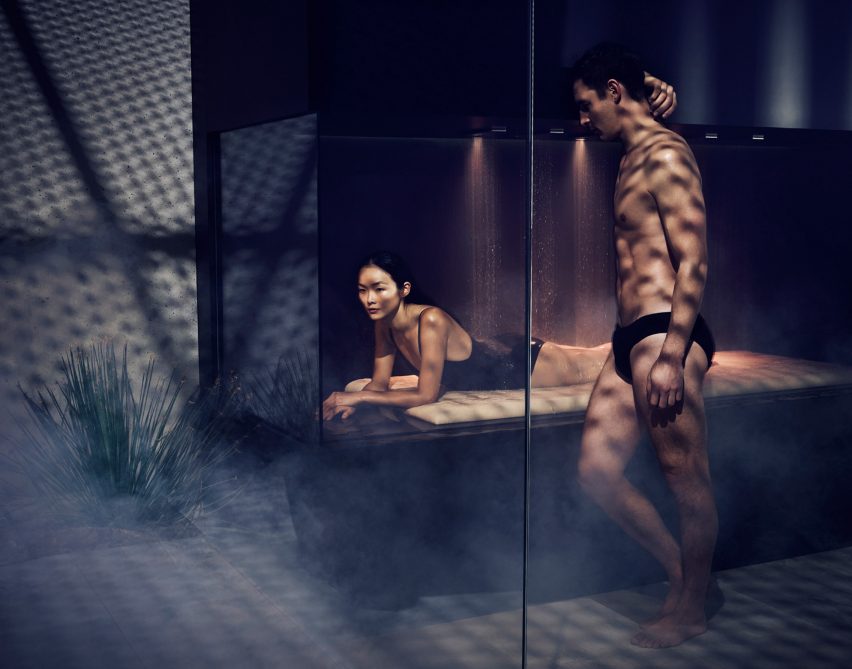 During ISH, each of the products were presented in a domestic environment. Among these was the Vertical Shower, which combines different outlet points with a variety of flow modes, from heavy water drops to powerful massaging streams.

The WaterFan and WaterCurve massage jets provide targeted massage in the neck area, thoracic vertebrae or lumbar vertebrae area. The height of the jets can be adjusted, allowing them to adapt to any user’s height.

Dornbracht collectively named the shower trio Aquapressure – a play on the word “acupressure”.

“Aquapressure harmonises muscle tone and has a positive effect on the perception of pain,” explained therapist Christoph Stumpe, who worked alongside Dornbracht to develop the new massage jets.

“Through Aquapressure, the flow of blood through the muscles intensifies, stimulating the flow of energy and aiding mobility.”

Other products showcased included Horizontal Shower, which is designed to be used while lying down. It offers various flow modes that each have a balancing, invigorating, or relaxing effect.

Foot baths were also on show, as well as an affusion pipe for skin-toning facial steams at the sink, a hot and cold water dispenser, and WaterTube, a shower product used to encourage blood flow, as well as to stimulate the circulation, metabolism and nervous system.

Begin typing your search above and press return to search. Press Esc to cancel.